In a sport-obsessed country it’s no wonder that pickleball has been embraced whole-heartedly in Australia! For those new to the sport, here’s everything you need to know about this sport that is considered one of the fastest-growing sports (reportedly 3 million+ pickleball players to date)!

Described as a cross between tennis, badminton and table tennis, the sport was created in 1965 by a group of friends in Bainbridge Island, Washington.

Eager to play badminton one afternoon, but unable to find a shuttlecock, they improvised by grabbing some table tennis paddles and a wiffle ball and lowering the net on the badminton court.

While the inventors — Joel Pritchard, Bill Bell and Barney McCallum — initially thought it would predominantly keep the kids entertained, it proved ideal for young and not-so-young players alike.

With its all-ages appeal, small court and slow-moving ball anyone and everyone can play.  There is also a growing elite level of the game! 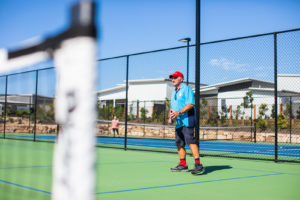 An ABC profile on Gabi Plumm, president of the Pickleball Association of Australia, explored how the sport came to Australia. She learnt the sport while visiting her son Morgan Evans in the US.  Evans won the 2016 US Open Pickleball Championships.

“[He] said ‘I think you should do this because it will be easier for you to play than tennis’ which is very true,” Ms Plumm said.  “It’s such an easy game to learn,” she said. “It is possibly one of the easiest games in the world to learn.  “Within 10 minutes you’re on a court playing with people who have been playing for some time.”

You can learn about joining a league in Australia and watch a tutorial on the sport at https://www.pickleballaus.org/.

Or perhaps you want to start your own league?
Pickleball courts are popping up everywhere including Latitude25 Community where there are three brand new Pickle Ball courts! These are welcome additions to a long list of amenities within the community keeping them happy, healthy and active!  Latitude25 has a state-of-the-art $3.5M Health Hub as part of its amazing lifestyle community, which combined with its newly completed full-service, spanking-new clubhouse, is just another reason residents love to call Latitude25 home. 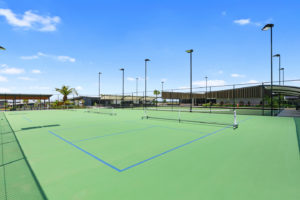